The Growth of Disability

July 26th, 2021, marked the 31st anniversary of the enactment of the Americans With Disabilities Act of 1990, also referred to as the ADA. Today, over one billion individuals (roughly 15% of the global population) live with some type of disability, making it the single largest minority group in the world.1 Domestically, that fact is also true, as roughly 26% of American adults are living with at least one type of disability.2 Although the largest minority group in the United States, today, is those who identify as disability, historically that hasn’t always been the case.

The context under which the disabled population has grown correlates to an expansion of the definition of disability. While the statutory language about disability proves to be very similar to that of the original drafting of the ADA, the operational definitions by which the courts and executive agencies adjudicate/regulate have consistently changed over time and by jurisdiction. Today’s definitions have expanded to encapsulate aspects of disability that weren’t recognized under the law in 1990. Cognitive disabilities, mental illnesses, and neurological diseases fall under the auspices of the protected class in the expanded role that disability holds under the law. Such inclusion of an expanded definition by the courts reflects a cultural shift in the application of disability from a medical model to a social model.

Over time, “disability” has encapsulated multiple perspectives that has shaped modern “disability” culture and law. Prior to the 19th century, disability meant “being disadvantaged by laws preventing participation in some areas of a community’s social, political, or economic life.”3 Disability, therefore, was an assignment of political status irrespective one’s physical/mental being. It wasn’t until the late 19th century that the concept of “disability” expanded to incorporate the notion of compromised health.4 This shift in the application of disability is indicative of the dominance of the perspective that was held for almost a century: the medical perspective (model). The medical model reflects on disability as impairments or debilitating facets of one’s persona that are different from that of the norm and should be fixed. Many in the disabled community have found this model to be unfavorable.

Building off the social movements and identity independence prominent in the Civil Rights Movement of the 1950’s, 60’s, and 70’s, many in the disabled community came together to develop the social perspective that is dominant in today’s disability culture. The social model was developed as a response to the medical model. The response shifts the focus from the individual and their impairment to one being considered disabled because of the barriers erected by society. Those prescribing to the social model articulate that society’s construction of barriers impede an individual’s ability to live and operate “normally” and therefore create the “disability phenomena”. Unlike the onus being on the individual to “fix” their impairment as in the medical model, the social model transfers the onus to accommodate these individuals onto society itself (government, entities, individuals, etc.). Thus, the social model highlights impairments/disability as a political and social problem instead of a medical one.

Disability Under the Law

The ADA defines disability as “(A) a physical or mental impairment that substantially limits one or more major life activities of such individual; (B) a record of such an impairment; or (C) being regarded as having such an impairment.”5 While the statutory language of the ADA, in effect, established a definition by which an enforcement structure could be built around, decisions of the court have significantly altered the usability of this definition. In practice, different jurisdictions have applied their respective definitions of disability (though all must adhere to the universal language/disabilities adopted by federal law) to cases whereby disabled people seek protection against discrimination6 by, then, “morally” unjust practices (i.e., homosexuality, gender identity, etc.) that is generally unenforceable today.7

As previously mentioned, the ADA has a broad definition of disability that is not universally applied across jurisdictions. The United States Government tracks and records data related to disability identification in the general population. Such data has been collected through national surveys and has been collected on both the general population and smaller subsets. The problem is, when tracking data on disability, everything that is collected is flawed (when not comparing it against itself). There is no uniform definition of what a disability is; and the prevailing definitions (if one could even call them that) were generally fluid over time. While older definitions of disability are limited in their applicability to those individuals with functional, sensory, and more physical impairments, newer definitions encapsulate identifiers for younger populations (childhood/infant disability), mental illness, and cognitive/developmental disabilities. Furthermore, when referring to the medical model, the definition of disability continues to expand with the inclusion of additional impairments/disabilities in the Diagnostic and Statistical Manual of Mental Disorders (DSM). The expansion of the definition, along with the fluidity of it thereof, has contributed to the increase in those who identify as disabled amongst the general population. As a result, over the past 30 or so years, the number of individuals in the United States (age 16 and older) who identify as disabled has increased from 13.2 million people to 61 million people (roughly a 362% increase over the 32-year period).8 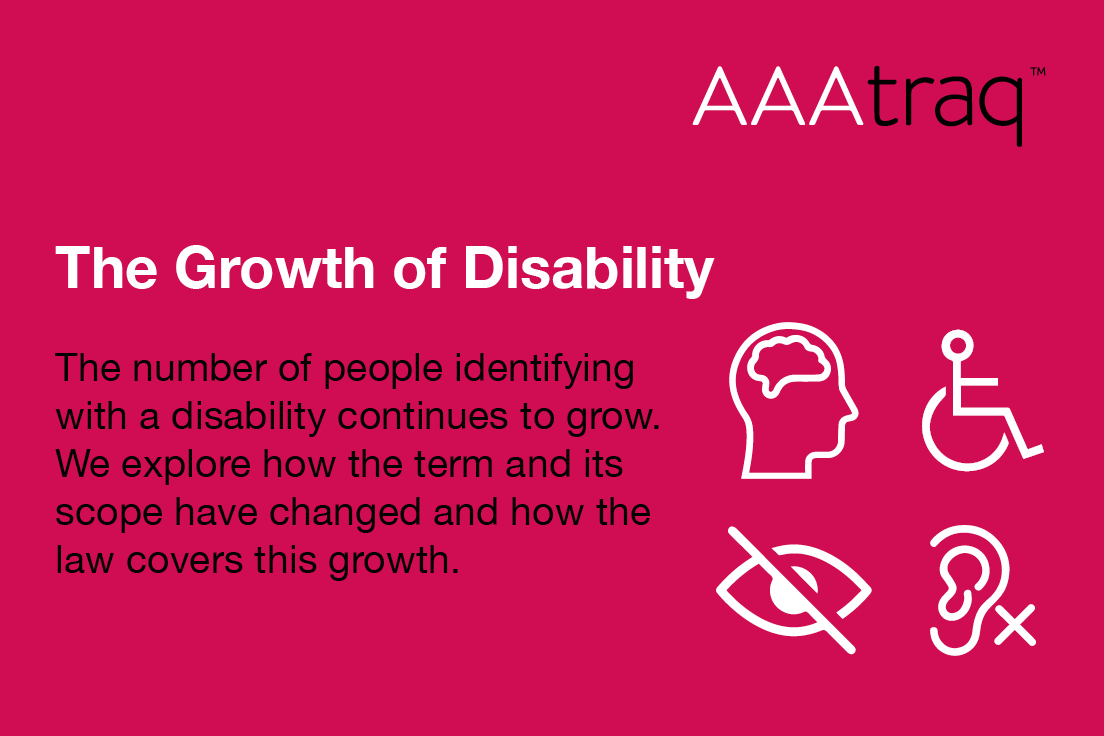 Infographic with pink background, AAAtraq logo, icons representing cognitive, visual, physical and hearing disabilities. Text - The Growth of Disability. The number of people identifying with a disability continues to grow. We explore how the term and its scope have changed and how the law covers this growth.