New data released by the Department of Labor’s Office of Disability Employment Policy indicates that web inaccessibility is amongst the most prevalent issues facing disabled users of the internet. Not only does inaccessibility limit individuals’ ability to engage with websites, but it has also been linked to a lower level of employment and can be causal of lower socio-economic status. In recognition of such information, many prominent officials have recognized the need for change and have sent a letter to the Department of Justice hoping to generate some forward movement on the issue.

What does the report reveal?

The report gives insight into the prominence internet connectivity and usability has in the way in which one interacts with the world. Individuals who are, for whatever reason, unable to access the internet, are excluded from engaging with the virtual world. The virtual world, for many, has become as deeply embedded into the fabric of society as the physical. Individuals engage in daily life activities such as telehealth medical treatment, commerce, entertainment, and socialization through the virtual world. Data indicates that while disabled individuals can access certain areas of the virtual world at equal rates as their able-bodied peers, they are excluded from others at disproportionate rates. According to the report, “The largest gap for a specific internet use by disability status was for entertainment: regardless of home internet connection type, people without disabilities used the internet for entertainment at higher rates than people with disabilities did, a difference of 17.5 to 19.1 percentage points.”2 The disparity illustrates the need for a universal doctrine that would bridge the gap towards equality.

While the ADA has been in effect close to 32 years now, the role of it in securing anti-discrimination protections on the web has been of much debate over recent years. No national standard exists for businesses/organizations to adhere to in a uniform fashion. As such, the role of determining the standard at which the compliance bar is to be set has traditionally been undertaken by the Department of Justice (DOJ) and the states.

On Friday June 10th, 2022, 10 United States Senators sent Attorney General Merrick Garland a letter calling on the department to ensure that websites comply with the ADA. The letter, among other things, calls on the DOJ to promulgate a universal standard for accessibility, clarify their position on covered entities under their guidance, and update their guidance on all forms of technology to be considered current. Such technologies include applications, mobile websites, online systems, and other types of information and communications technology (ICT). The letter is one of many that members of congress have sent to the Department over the years, with little effect. In March of 2022, the Department of Justice ended a four-year silence on the issue when it issued updated guidance concerning web accessibility.

Conclusion The ability to engage and interact with one’s society dictates their station in life. Employment opportunities, access to health care, the ability to communicate, and the ability to engage in commerce are essential pillars to the foundation of today’s American society. The inability to access even one of those pillars significantly disadvantages an individual and puts them at greater risk for future. According to a recently released report by the Office of Disability Employment Policy for the United States Department of Labor (DOL), disabled Americans are at a greater disadvantage for being able to access these facets of life. This fact is only exacerbated by the engagement of these activities through a digital modem/on the internet. The internet, over the past three decades, has integrated itself into the fabric of American society in ways that could not have been imaginable in previous years. Even more recently, with the dependence upon the internet during the onset of the COVID-19 Pandemic, there was a greater reliance on internet to engage in major life activities. As such, a group of U.S. lawmakers took it upon themselves to jumpstart forward progress on the issue. Moving forward, as the digital world further integrates into the everyday lives of humans, this issue will take more prominence.

1 “Disability and the Digital Divide ”(Office of Disability Employment Policy for the United States Department of Labor, June 2022), https://www.dol.gov/sites/dolgov/files/ODEP/pdf/disability-digital-divide-brief.pdf (opens in a new window)., 2.

2 “Disability and the Digital Divide ”(Office of Disability Employment Policy for the United States Department of Labor, June 2022), https://www.dol.gov/sites/dolgov/files/ODEP/pdf/disability-digital-divide-brief.pdf (opens in a new window)., 16. 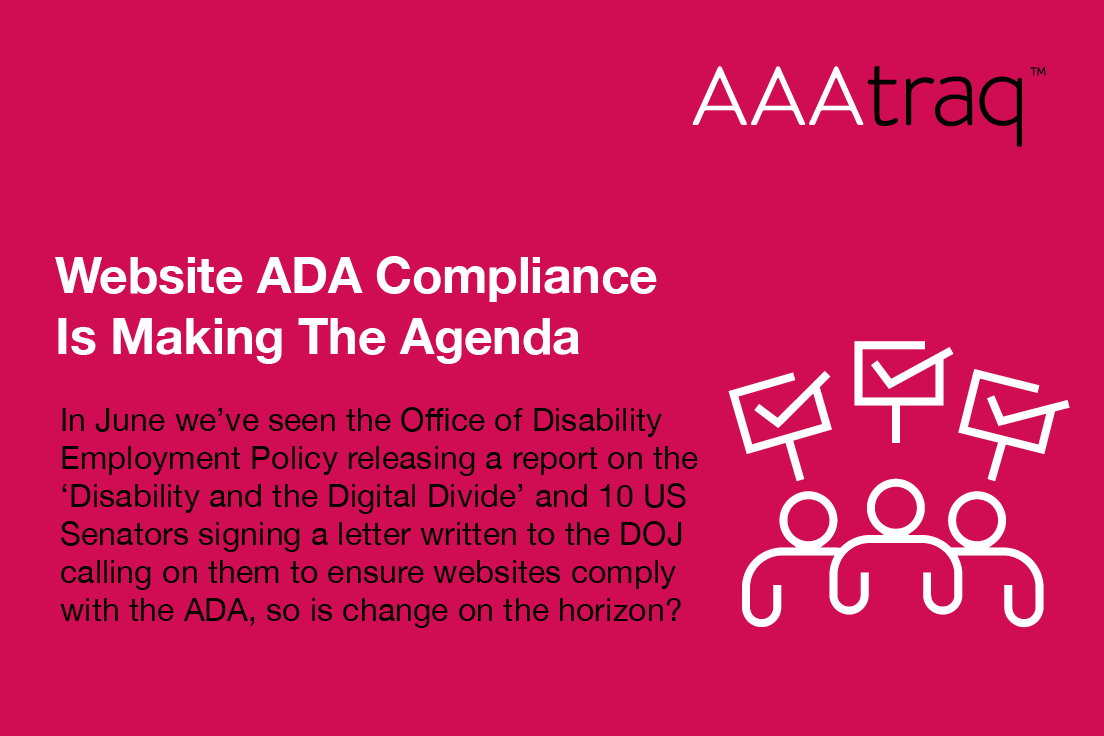