The start of the year often brings about a series of changes with people making new year’s resolutions and organizations starting new campaigns. However, one change we haven’t seen is website ADA legal demands, it’s only a few days into the year and we’re already seeing stories hitting the headlines.

https://topclassactions.com/disability-class-action-lawsuit/nuts-com-class-action-alleges-website-inaccessible-to-blind-visually-impaired-consumers/ (opens in a new window)

This lawsuit claims that the Nuts.com website is not compatible with screen readers, a technology used by visually impaired users which enables them to access a website. Specifically, the class action claims “a lack of alternate text (code explaining images), the presence of forms that require a mouse instead of a keyboard and other navigation issues make the website inaccessible. Because of the website’s lack of accessibility, blind and visually impaired individuals cannot use drop-down menus to gain access to discounts available to others,”.

https://www.law360.com/articles/1561731/corepower-yoga-and-soulcycle-websites-allegedly-flout-ada (opens in a new window)

These two class actions were both filed by a legally blind plaintiff. Both claims, which were filed in New York, allege that the websites for these companies’ website violates the Americans with Disabilities Act (ADA) because they are not “equally accessible to blind and visually impaired consumers”.

https://topclassactions.com/lawsuit-settlements/lawsuit-news/invicta-class-action-claims-website-inaccessible-to-blind-visually-impaired-users/ (opens in a new window)

Another lawsuit filed in New York alleging that a company has failed to make its website fully accessible to individuals who are blind or legally impaired. This class action was filed by Daniel Rodriguez, against the Invicta Watch Company of America and claims the company has “failed to design, construct, maintain, and operate its website in a way that would make it independently usable for individuals who are blind or visually impaired.”. Rodriguez is not only claiming that the website violates the ADA, but also the New York City Human Rights Law.

Something that a lot of these, and similar claims have in common, is that they often cite alternative text (alt text) as one of the violations of the ADA. Alt text is text which describes the appearance and function of an image on a website, this text is used by screen readers and other assistive technologies to enable users with visual impairments to interpret the image. There are many resources available online about what alt text is, why it’s important and how to write it, but one new resource from the Bureau of Internet Accessibility (opens in a new window) titled Images That Don’t Need Alternative Text Still Need ALT Attributes (opens in a new window) is worth a read to help mitigate the risk for your website. 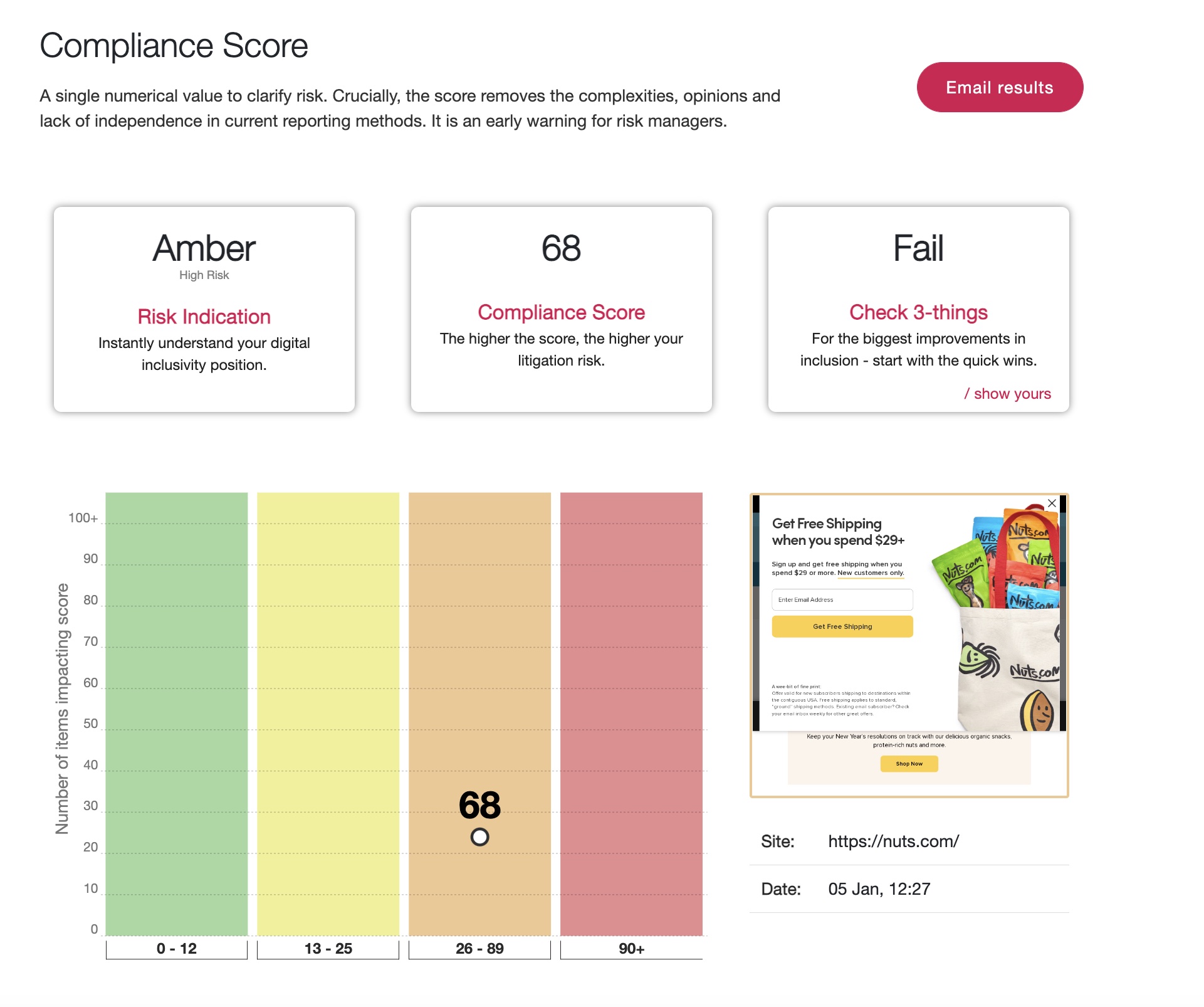 Nuts.com (opens in a new window) had a Compliance Score of 68 and ‘Amber’ (High) Risk Indicator at the time of writing. 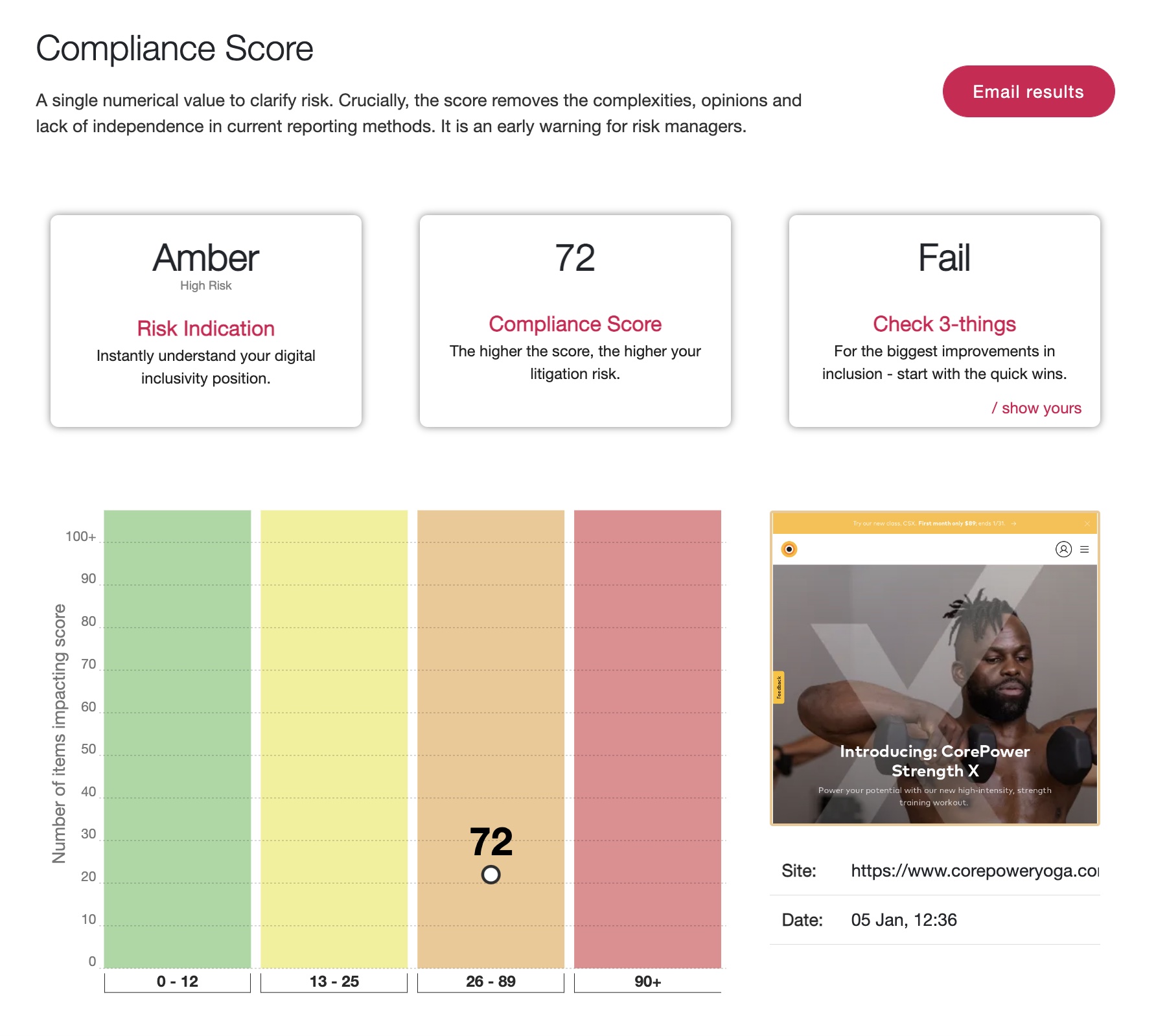 CorePower Yoga (opens in a new window) had a Compliance Score of 72 and ‘Amber’ (High) Risk Indicator at the time of writing. 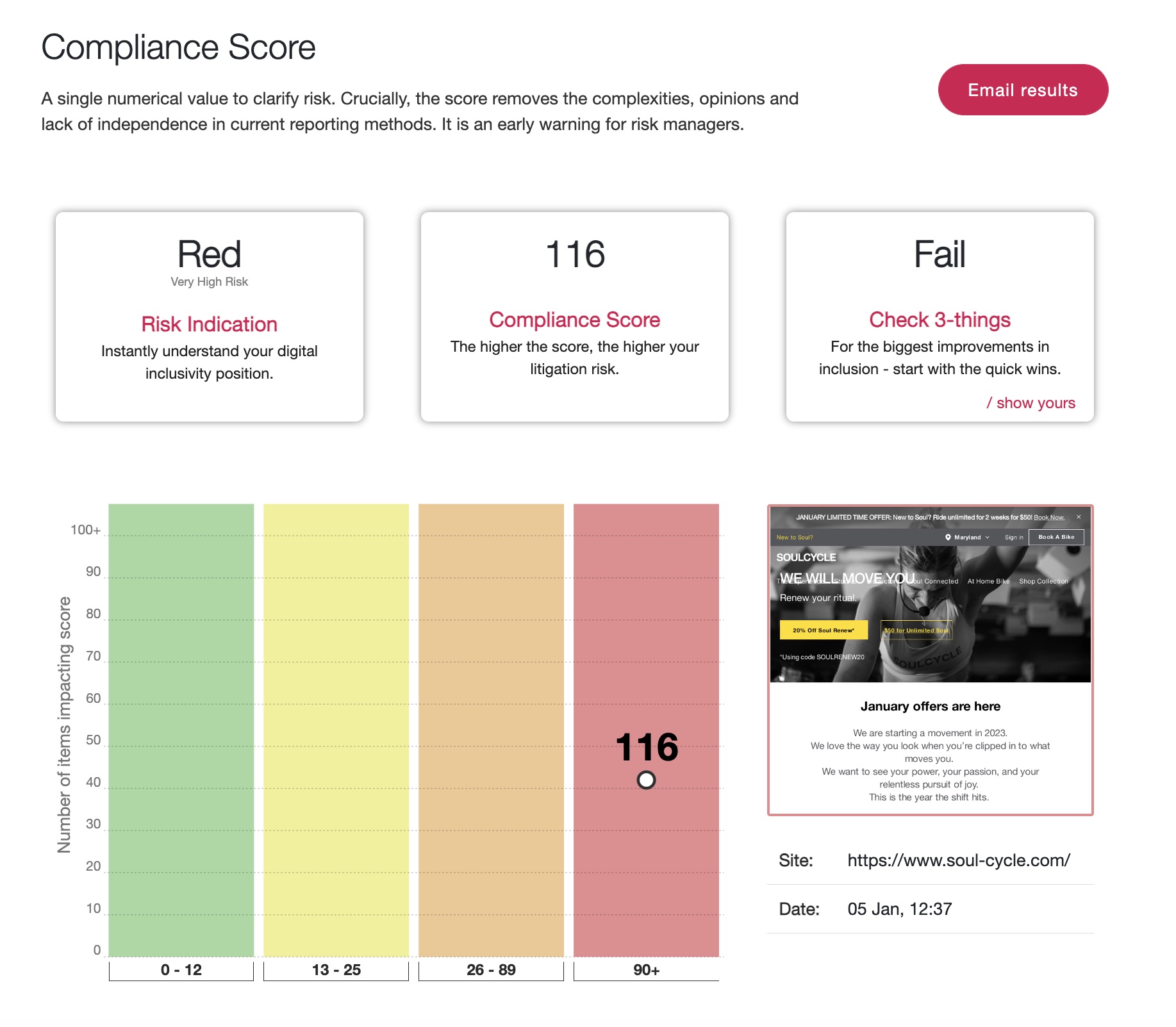 SoulCycle (opens in a new window) had a Compliance Score of 116 and ‘Red’ (Very High) Risk Indicator at the time of writing. 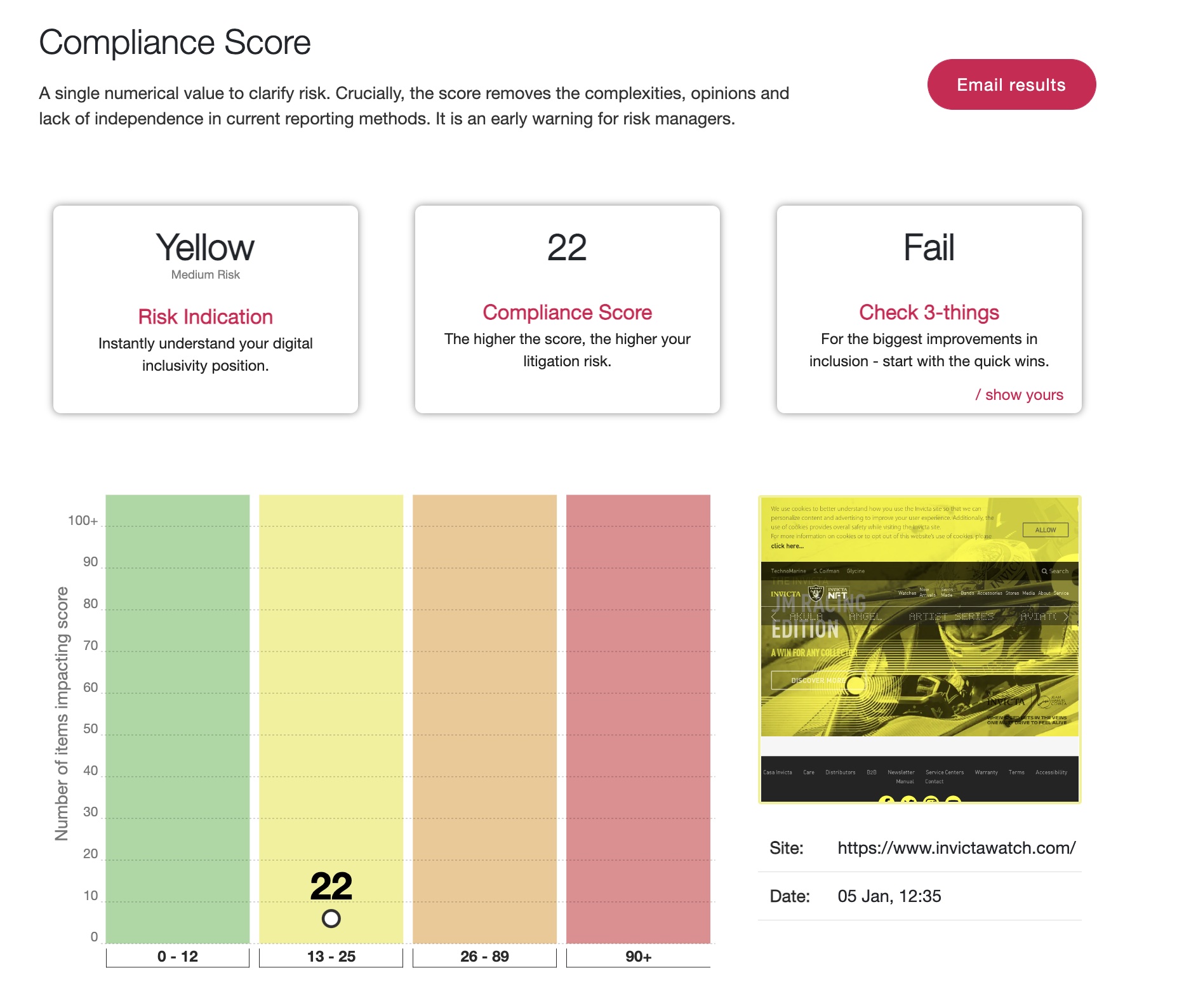 Invicta Watch (opens in a new window) had a Compliance Score of 22 and ‘Yellow’ (Medium) Risk Indicator at the time of writing.

What will be the 2023 ADA Website Litigation trend? – AAAtraq Weekly Round Up

Do laws relating to website and online accessibility affect my organization?

Why do we need a risk management approach to online accessibility?