Domino’s – a slice of stupidity

The ongoing accessibility case involving Domino’s that has been dragged through the US lawcourts is almost a textbook example of how to damage your reputation and brand. Arguably the most high-profile accessibility case from the last year or so, the case has generated thousands of negative headlines and column inches. Although the case is in the US, the coverage is global, and it continues to generate international media attention. Remember, those headlines are now always there and cannot be undone, waiting to appear in any potential Google search. The Domino’s brand is now tainted as a large corporation who doesn’t care about disabilities; we certainly don’t envy the task ahead for the Domino’s PR department.

The case originated in 2016 when the company was sued by Guillermo Robles, a person with a visual disability who was unable to order a custom pizza from the website and app, due to his inability to use assistive technology. The case, referencing the 1990 Americans with Disabilities Act (ADA), has gone through various stages. The latest chapter was in October 2019 when the US Supreme court denied Domino’s petition to hear the case, leaving an existing judgment from a lower court standing. Unsurprisingly, the failed petition generated massive media attention, and more negative press.

In our view, Domino’s decision to fight the original ruling was very poor. The success of the original case looks pretty bad but arguing against it is even more damaging; a huge global corporation taking on a single visually impaired person resonates negatively on just about every level. Even if there were some merits to the case from a legal standpoint, or nuances around the detail, the vast majority of customers are going to see this as a classic “David Vs Goliath” scenario. Whatever angle you look at it, it doesn’t look good.

How to trash your brand

The question is, what can other organizations learn from this? Forgive the pun, but what are the takeaways?

On the surface, the actions from Domino’s are hard to fathom. How can it be possible for such a global brand that is so reliant on consumer trust to take such a stance? The home pizza delivery market is extremely competitive, particularly with entrants like Uber Eats and Deliveroo. Anything like this is negative on a players’ brand value and can have significant long-term damage. We are sure within Domino’s there will have been detailed analysis predicting what the actual cost to the bottom line may be. There is the old saying that there is “no such thing as bad publicity”, but in the age of social media amplification and an ethically savvy customer base, this simply doesn’t hold true any longer.

What should Domino’s have done differently?

Of course, the best action would have been to introduce measures that prevented the action in the first place. Domino’s should have taken digital accessibility compliance seriously in the first place, making sure all digital channels are AA compliant with WCAG (2.0 then, 2.1 now) guidelines, and then putting processes in place and investing in tools that maintain accessibility levels.

The next best action would have been to respond immediately and visibly to the original ruling. It’s ironic that the cost of just sorting out the website and apps would have been low to minimal for a global corporation, likely in low tens of thousands of dollars in development costs; just dealing with some simple flaws might have even been a few dollars if dealt with internally. The cost of reputational damage and legal costs will vastly exceed these costs many times over.

In responding immediately it’s also possible that Domino’s could have minimized the reputational damage; perhaps they could have made a statement about making a mistake, how they are now committed to improving accessibility and even making resolutions to lead in this space. When corporates are seen to respond swiftly and make necessary changes with tangible results, there can be surprising levels of goodwill from customers. It can even be an opportunity to get some good PR.

The third and ultimately minimum response would be to at least do something now, particularly on the back of the response of the US Supreme Court in October.

However, it really doesn’t look like Domino’s have learned from this episode at all. Not only has there been the ongoing media attention, but the websites still look like they have some very basic accessibility issues that are entirely avoidable. We found some pretty fundamental issues when we ran our an automated accessibility assessment across a number of their pages.

For example, on the main Australian site some images that are used as links don’t have alt text so these won’t give a description of the image to screen reader users, failing accessibility. 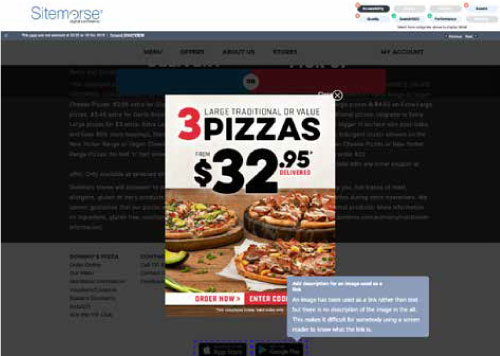 On the Domino’s UK corporate site the descriptive labels on a form field are missing so a screen reader cannot understand them. 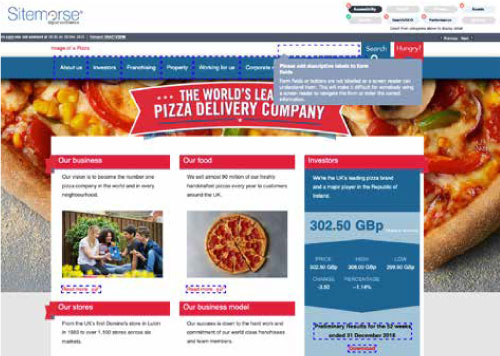 What lessons can we learn?

To us the “takeaways” from the Domino’s saga for organizations seem clear cut.

We bang on and on about digital accessibility for good reasons. It’s your legal and moral responsibility and it’s a reputational risk issue. Don’t be the next Domino’s, find out how Sitemorse can help.

In taking the first step on your compliance journey you start to demonstrate reasonable adjustment in understanding current position. Complete your details below to receive your complementary RISK PROFILE.

On signup you will immediately receive your first, and then a weekly risk assessment – ahead of the full service switch on February 28th. Offer Summary.

You should receive an email from us in the next 5 minutes, we send this to confirm the details you entered.

If not received in this time, it would be worth checking your email spam/junk folders (especially outlook users) - and add us to your safe senders also?