More than four months after a California federal judge ordered Domino’s Pizza LLC to make its website fully accessible to blind and visually impaired patrons, the pizza chain and a blind man who sued it for violations of the Americans with Disabilities Act (ADA) announced on Nov. 5 that they had reached a settlement in the five-year-old lawsuit.

In the joint notice of settlement, no details of the agreement were disclosed. The parties asked the U.S. District Court for the Central District of California to vacate all upcoming dates and deadlines, including a jury trial, which was scheduled to begin Nov. 16.

In September 2016, Guillermo Robles, who is blind, sued Domino’s in the District Court for having a website and a mobile app that are not fully accessible to blind or visually impaired people. Robles said that he was unable to order a customized pizza from the website. Robles claimed that this lack of equal access constituted a denial of products and services in violation of Title III of the ADA, 42 U.S.C. § 1281 et seq., and California’s Unruh Civil Rights Act, Cal. Civ. Code § 51 et seq. Robles sought an injunction requiring Domino’s to comply with the Web Content Accessibility Guidelines version 2.0 (WCAG 2.0) for websites and mobile apps.

Judge S. James Otero granted Domino’s motion to dismiss in March 2017. The judge found that the ADA applied to the website because it constituted a service of Domino’s places of public accommodation. However, because the U.S. Department of Justice (DOJ) has not issued a final ruling related to website ADA requirements, Judge Otero found that imposing liability on the pizza chain under the ADA for WCAG 2.0 infractions would violate its due process rights under the 14th Amendment to the U.S. Constitution, U.S. Const. amend. XIV.

Robles appealed to the Ninth Circuit U.S. Court of Appeals, which reversed in October 2018. A panel agreed that the ADA applies to Domino’s website and app because they “facilitate access to the goods and services of a place of public accommodation.” The DOJ has “repeatedly affirmed” that the statute applies to such websites, the panel said, which notably includes effective communications with disabled customers to facilitate “full and equal enjoyment” of goods and services. The panel held that the lack of specific regulations from the DOJ did not eliminate Domino’s duty under the ADA. In reversing, the panel declined to express an opinion on whether the website complied with the ADA.

In June 2019, Robles filed an amended complaint in the District Court, still alleging violations of the ADA and Unruh.

In October 2019, the U.S. Supreme Court denied Domino’s petition for certiorari on the application of the ADA to websites and apps. The case was remanded to the District Court for discovery and a decision on the merits. Back in the trial court, the case was reassigned to Judge Jesus G. Bernal.

In a June 2021 ruling, Judge Bernal partly granted Robles’ summary judgment motion under both statutes. He rejected Domino’s argument that “the existence of a franchise operation breaks the ‘nexus’ between website and physical store.” Even though Domino’s does not own or operate brick-and-mortar stores where a person may pick up a pizza ordered on its website, the judge noted that Domino’s, the parent company, is the only party that can make the web-based changes.

Finding it undisputed that the website is not fully accessible, Judge Bernal concluded that injunctive relief was clearly warranted. Deeming the current accessibility of the app to be in question, the judge denied summary judgment on that point.

Relying on the Ninth Circuit’s ruling, Judge Bernal found that the appropriate injunctive relief was to order Domino’s “to conform its website to the WCAG guidelines.” He also awarded Robles $4,000 in Unruh penalties. Domino’s summary judgment motion was denied in its entirety. 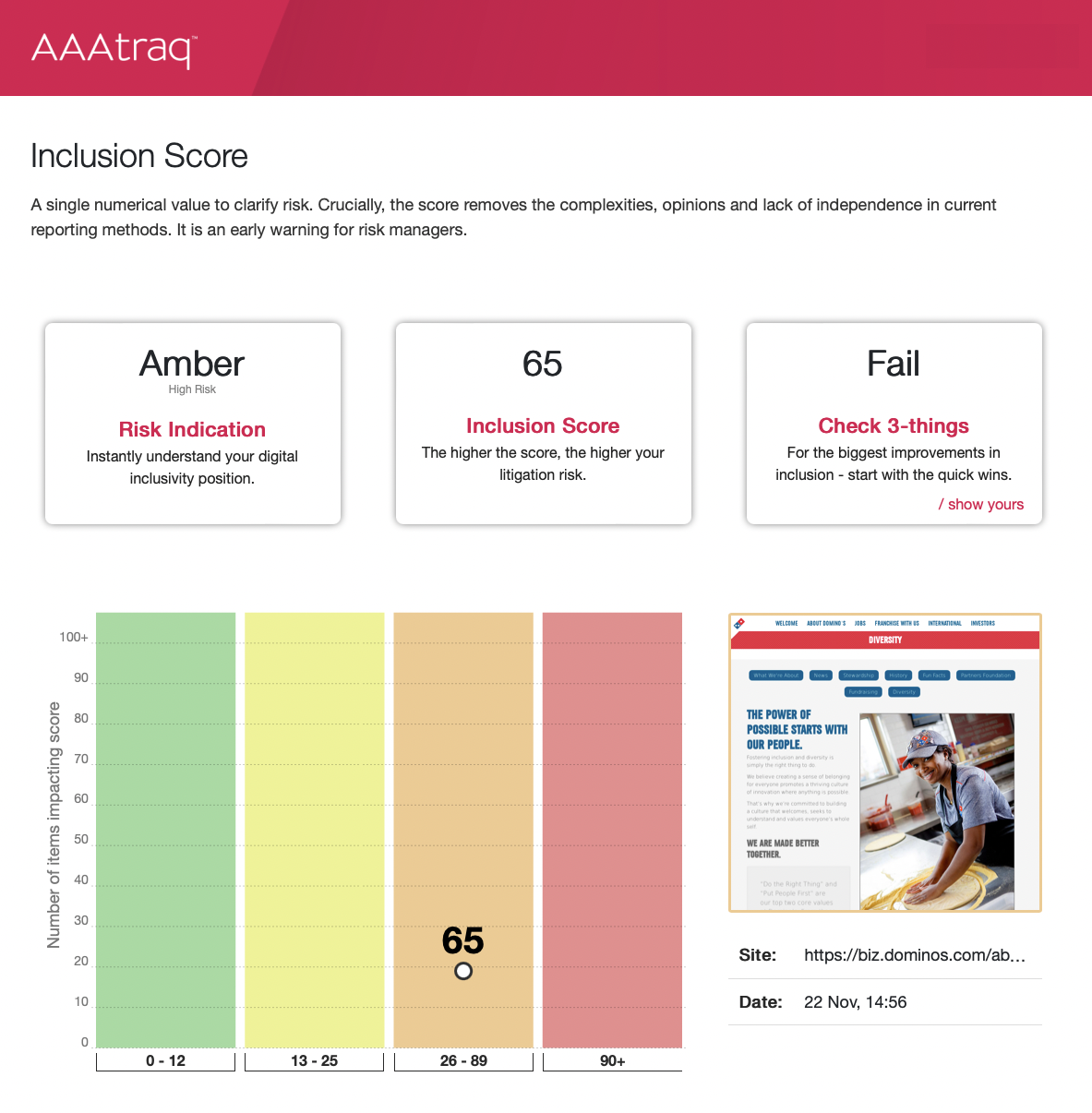 Domino’s Diversity Page // has an Inclusion Score of 65 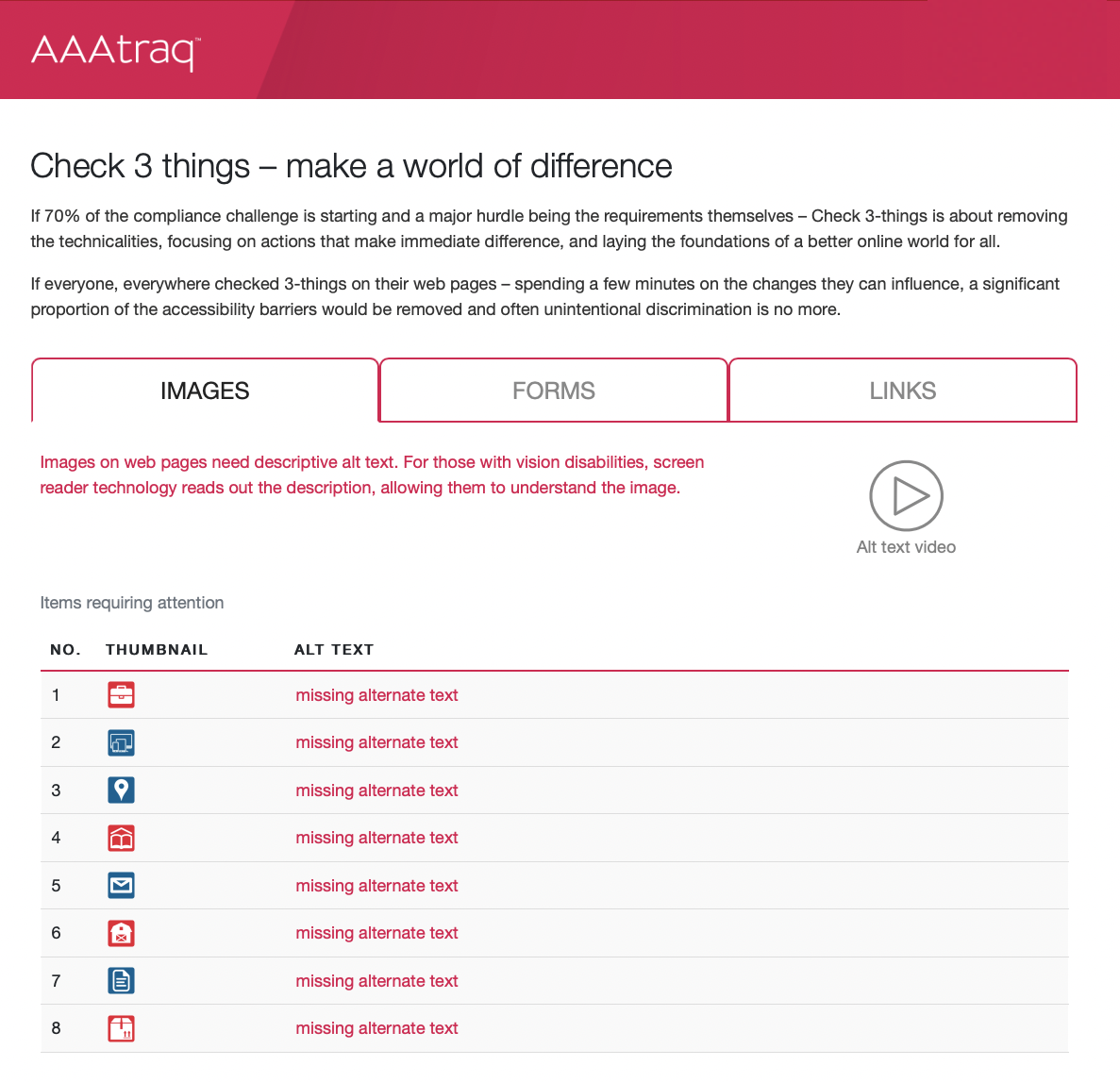 Domino’s Diversity Page // quick wins would be to add alt text to images.