On February 28th, 2022, over 170 disability organizations signed and issued a letter calling on the United States Department of Justice (DOJ) to finalize rules relating to online accessibility.1

The letter, a response to the DOJ’s failure to move on the issue since its withdrawal of proposed rules on online accessibility in 2017, signals a reinvigorated effort on the part of the disabled community to gain consensus on the issue. The letter calls on the DOJ to make allowances for equality in access to activities and major life functions that were noteworthy components of the world’s shift to the online environment during the COVID-19 pandemic. Such activities include access to telehealth, distance learning, remote work, and online commerce.

History of Online Accessibility Regulations by the DOJ2

Modern litigation claims that have reached the federal courts find their origins in the enactment of the Americans with Disabilities Act of 1990 (ADA).3 One year following the passage of the ADA, the DOJ issued its final rules following Title II and Title III. At this point in time, the internet had yet to house a website (which would happen two weeks later), so the rulings were absent any direct mention to website accessibility. It wasn’t until 1995 that the first website accessibility guidelines were written, and it would be another four years (1999) before the World Wide Web Consortium (W3C) would adopt/publish the Web Content Accessibility Guidelines (WCAG) 1.0. Since then, the W3C has the produced standards and guidelines that have served as the suggested norm for website accessibility.

2008 was an important year for web accessibility. First, the DOJ issued “Notice of Proposed Rulemaking” to adopt the revised ADA guidelines and revise Title II and Title III regulations to address issues with public response to 2004 “Advanced Notice of Proposed Rulemaking (ANPRM)”. In December of the same year President George W. Bush signed the ADA Amendments Act of 2008, which fundamentally redefined the scope of what it meant to be disabled. In the same month, WC3 adopted WCAG 2.0 to replace the previous standards (WCAG 1.0) as the recommended norm.

In 2010 the DOJ began its rulemaking process to clarify their position on web accessibility. “Nondiscrimination on the Basis of Disability; Accessibility of Web Information and Services of State and Local Government Entities and Public Accommodations” was issued by the DOJ and was subsequently followed up on in 2014 when they began developing and updating rules to address web information and services, movie captioning, and video descriptions. In 2016 the Section 508 standards were updated to reflect WCAG 2.0. In April of 2016 the DOJ issued supplemental advanced notice of proposed rulemaking (SANPR) which was later withdrawn in 2017. In their notice of withdrawal, the DOJ stated their reason for withdrawing as being “The Department is evaluating whether promulgating regulations about the accessibility of web information and services is necessary and appropriate.4" Since 2017, the number of litigations has increased exponentially, while nothing has changed regarding federal regulations. In 2021, there were over 4,000 digital ADA lawsuits that reached federal court.5

The Importance of the Letter

As previously mentioned, the letter by the disability organizations signals a reinvigoration of efforts to redefine the issue of accessibility in a regulatory manner. Previous DOJ rulemaking notices clung to ideas of making WCAG standards/guidelines the legally prescribed benchmark for websites to meet. Still, absent a ruling, the DOJ inconsistently applies WCAG 2.1 AA standards to websites and enforces some web accessibility content violations. Since the 2017 notice of withdrawal, the DOJ has remained relatively quiet on issuing another ruling, which has angered many in both the disability world and in Congress. In June of 2018, 103 members of the U.S. House of Representatives wrote a letter to then-Attorney General, Pete Sessions calling on him to ease the amount of litigation to reach federal courts concerning web accessibility as there was a lack of a national standard for companies to meet. The importance of having a national standard can only be underscored by an inconsistency among judicial jurisdictions on whether to apply the ADA to website content.

AAAtraq supports these organizations in their effort to promote a more inclusive environment on the internet and calls upon everyone to take their own measures in ensuring their own inclusivity online. Start by understanding the level of risk associated with your website. To ensure that your websites are inclusive, consider AAAtraq. AAAtraq encourages you to take 60 seconds to understand your own risk position – you can do it, free at https://AAAtraq.com/ (opens in a new window) - no registration required - and results are immediately available and understandable. Green = good - red = bad.

4 “Nondiscrimination on the Basis of Disability; Notice of Withdrawal of Four Previously Announced Rulemaking Actions” (Department of Justice, December 26, 2017), https://www.federalregister.gov/documents/2017/12/26/2017-27510/nondiscrimination-on-the-basis-of-disability-notice-of-withdrawal-of-four-previously-announced (opens in a new window) 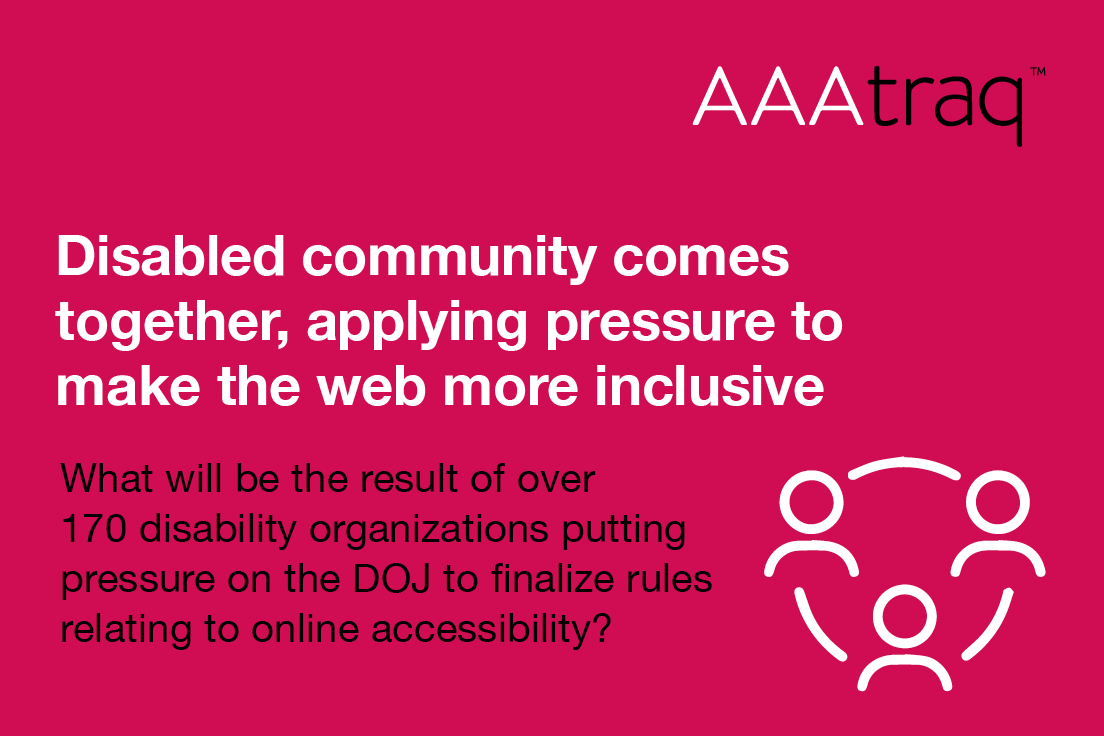 The Need to Have an Online Presence with Limited Resources

Round up for April, who has been covering online inclusivity?

AAAtraq’s ADA audit finds 87% of Restaurant websites in California are not Inclusive and exposed to litigation.

Get the ADA Problem ‘Off Your Plate’ - Webinar for Restaurant Owners, Operators & Manager

Web Accessibility Demand Letters, What to Do?

AAAtraq announces the release of an ADA Audit, looking at Inclusivity across Restaurant websites in California

Round up for March, who has been covering online inclusivity?